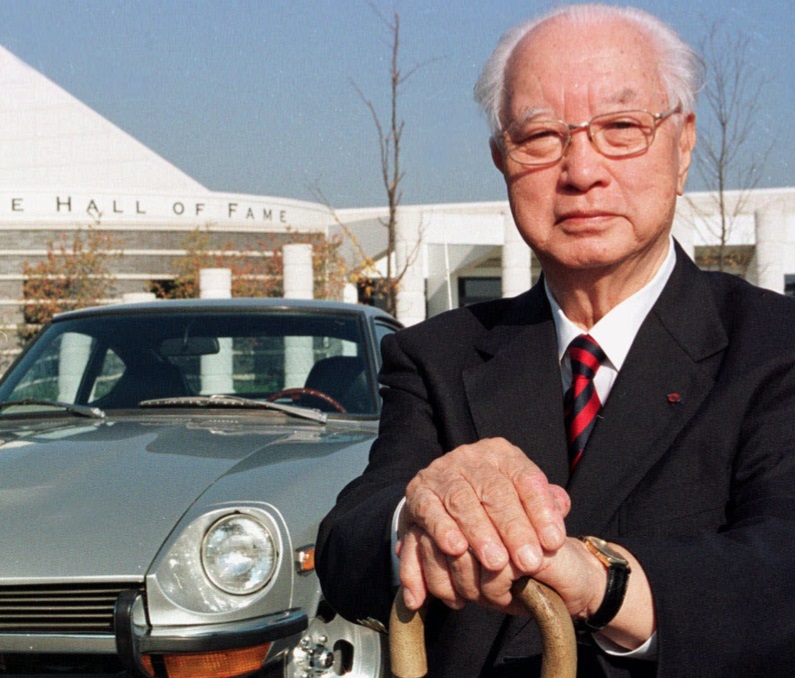 For much of the 20th century, when historic automakers such as Ford and GM reigned supreme in the American market, Japanese cars were not looked upon favorably at all. For many American consumers, the word “Japanese” was synonymous with “cheap, rusty junk.” While the Big Three automakers were posting record profits year after year and dominating the market, you would be hard pressed to find many Japanese cars on the market for the first half of the 20th century, let alone a sports car!

This may still be true today if not for one man, Yutaka Katayama (1909-2015) who took Nissan to new heights in the American market. Katayama was born in Shizuoka Prefecture, Japan, the son of an established businessman whose work took the family outside Japan. It was during these formative years when Katayama was first exposed to the United States. Katayama attended Keio University and while at school, got a job on a freighter which took him again to the United States. While the ship was being reloaded, Katayama spent months travelling the Pacific Northwest and likely, beginning to fall in love with the United States.

Yutaka Katayama is widely considered to be the father of the Z car, but his beginnings at the now world-renowned automaker were not so glorious. Mr. K, as he is now affectionately known, began working for Nissan in 1935. Katayama’s aggressive approach to business and marketing was often negatively received by his superiors. Katayama valued creativity and whimsy in a business environment that valued the exact opposite — corporate Japan in the 20th century was rigid, demanded conformity, and was, well, corporate. As a punishment for his behavior, Nissan executives decided to send him to Southern California to do market research. If that doesn’t sound like too much of a punishment to you, you’re probably right, but given the business circumstances, the whole stunt was likely little more than a practical joke. Nissan had essentially no presence in this region at the time.

Mr.K, however, took this as a unique challenge. Nissan executives expected Katayama to fail and return to Japan, but he did the exact opposite — he asked to remain the U.S. and begin to build a real presence there for Nissan. Again, Japanese vehicles were regarded with almost universal disrespect within the United States at this time. Nissan reportedly sold no more than 1,000 vehicles annually in the entire United States! Skeptical of this effort, Nissan provided Mr. K with an advertising budget of $1,000 and allowed him to continue working in the states. Mr. K had given himself a massive undertaking.

Katayama set up a small office in downtown Los Angeles and began to recruit dealers. Katayama had grand plans for his U.S. expansion for Nissan. Branded as Datsun (the first of many American rebrandings led by Mr. K), the new venture proved tentative at first. Katayama would try and convince any able dealer he could to take on this new Datsun brand despite lackluster performance in the past. At one point, Katayama reportedly round up dealers and tried to convince them all of the impending success they would experience as new Datsun dealers — “Everyone in this room will be millionaires.”

All this work eventually paid off in 1967, when Nissan released the 510 — a powerful little vehicle that came as a sedan, coupe, or station wagon. Nissan had high hopes for this already in the Japanese market, but had no idea how much success they would see in the United States with the 510. By 1967, Mr. K had built up a formidable collection of Datsun dealer partners and was fully prepared to unleash this new product on the American market. The 510 proved to be Mr. K’s first major success — the American market loved it and it sold extremely well. The real success, however, was that Katayama had proved himself to his new American partners. Katayama had crafted a perfect manufacturer-dealer relationship and was inundated with potential new dealers, which was a perfect scenario for his next big project…

The Datsun 240Z, the original Z-car, was designed by Yoshihiko Matsuo, but the concept was all Mr. K’s. The impetus for this came from Mr. K’s infatuation with an idea: How could we reproduce the relationship between man and horse that the automotive world seems to be lacking? “How can we transpose the relationship between man and horse into the one between man and car? Even after I was sent to Los Angeles in 1960 to establish Nissan Motors in the U.S., this question never really left me. Eventually I came up with the concept of the Z-car. It was a sports car with a sleek body with a long nose and a short deck, designed so that it could be built utilizing some of the parts and components that were already used in our other production cars, and it was a car that anybody could drive easily and that would give the driver that incredible feeling of jubilation that comes when car and driver are as one.”

Many people helped design and build what we all know today as the Z-car, but Katayama spearheaded the effort and was its larges proponent. Katayama had high expectations for this car, that it would fulfill a need the American market didn’t yet know it had.

The story that ensued is one we all know. The 240Z took off like a rocket in the American market, an immediate success. Dealers across the country had waiting lists sometimes as much as a year long for the stylish new sportscar. In the coming years, the 240Z would transition to the 280Z, and then the 280ZX, and on, but Katayama’s work was done — he retired in 1977. Mr. K’s legacy was already set firmly in place, and he remained as enthusiastic a “car-guy” as ever. Mr. K frequently traveled to Z-car events, never shy to pose for a picture with a fan or sign an autograph. Mr.K was inducted into the Automotive Hall of fame in 1998. Katayama was a prominent figure in the Z-car community right up until the end. Mr. K passed away in 2015 at the age of 105, peacefully, with his family by his side.